Our customer, a producer of pharmaceutical precursor chemicals, wanted to ship its temperature sensitive chemicals to pharmaceutical companies worldwide. Impact Cases was approached to design and manufacture a specialized low temperature container for this purpose.

• The temperature of the chemicals could not exceed
-40° C, or they would be rendered useless.

• Travel time could take up to 100 hours. There existed the potential that the container could be left on the tarmac (in high temperature climate regions) for extended periods of time.

• The value of the chemicals to be shipped exceeded $400,000 (US), so mission failure was not an option.


Impact’s design professionals met with the company’s chemical engineers to discuss the parameters of this unusual application. The customer’s first thought was to have a container lined with Styrofoam and a series of thermoelectric “chillers”.

However this posed two problems:

2) In order for the thermoelectric “chillers” to operate, a battery or generator must also be shipped with the container.

In order for the chillers to maintain the low temperature for a minimum of 100 hours, an exceptionally large battery (such as those used with electric forklift trucks) would be needed. A gas powered generator was out of the question, in particular when shipping via air transport.

The design proposed by Impact Cases was from a slightly different perspective. Impact designers chose to use a closed cell, cross linked foam which had similar thermoconductive ("R" value) properties to insulating styrofoam. The advantage of the closed cell, cross linked foam was two fold: 1) The foam was compressible and could be subjected to a multitude of impacts without degradation; and 2) The closed cell structure of the foam prevented it from absorbing liquids or moisture and could be readily cleaned.

The insulating foam was precision machined to fit the aseptic vessel. Eight aluminum bayonet “chillers” (containing dry ice) were embedded in the foam around the vessel with channeling to allow for micro circulation due to temperature fluxes. The container shell consisted of three sections: The bottom section had a machined HDPE base plate resting on top of the insulating foam which facilitated the centering of the aseptic vessel. The removable mid-section had the machined insulating foam insert and the cavities for the eight dry ice bayonet chillers. A thermocouple and digital temperature gauge were installed so technicians could verify the internal temperature without opening the container.

The removable top section also had a machined foam insert to accept the aseptic vessel and bayonet chillers. Further, there were indirect ventilation passages to allow for the escape of carbon dioxide without compromising the insulation integrity of the container. 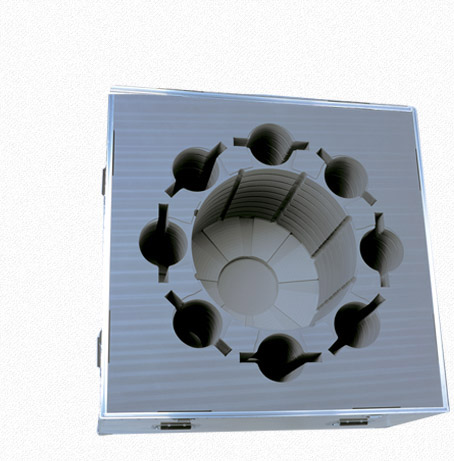 Return To Case Studies
Tell Us About Your Project